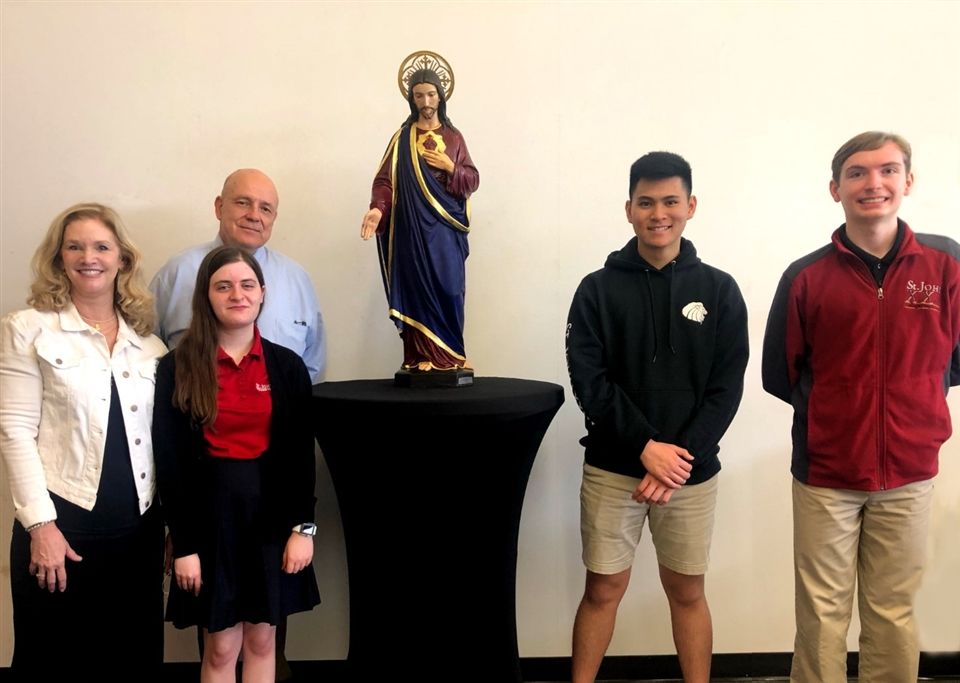 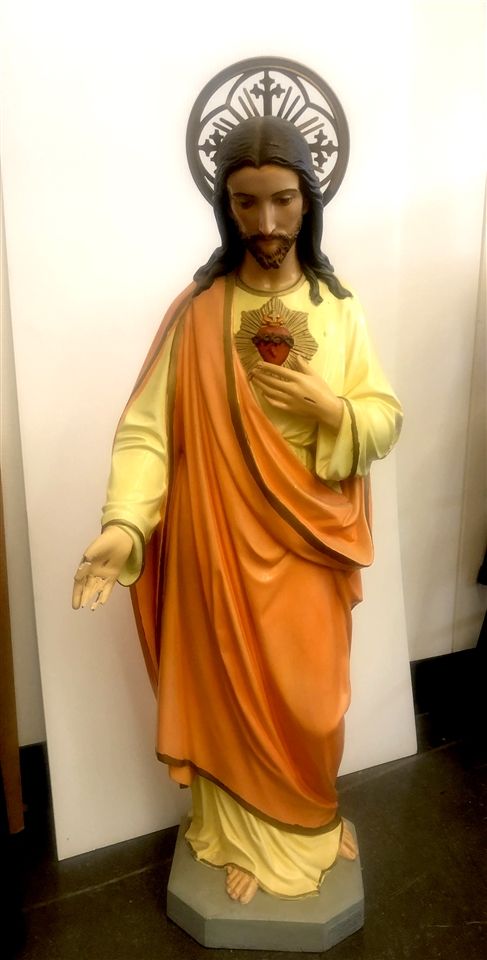 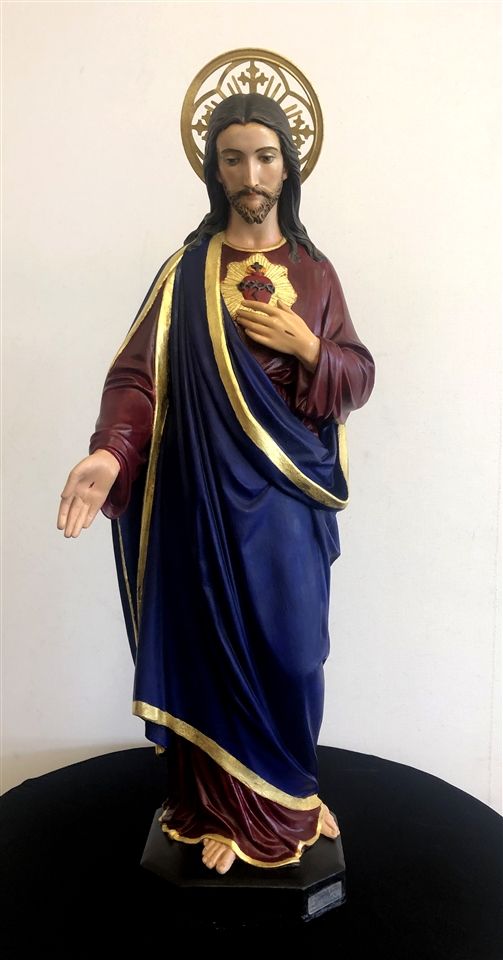 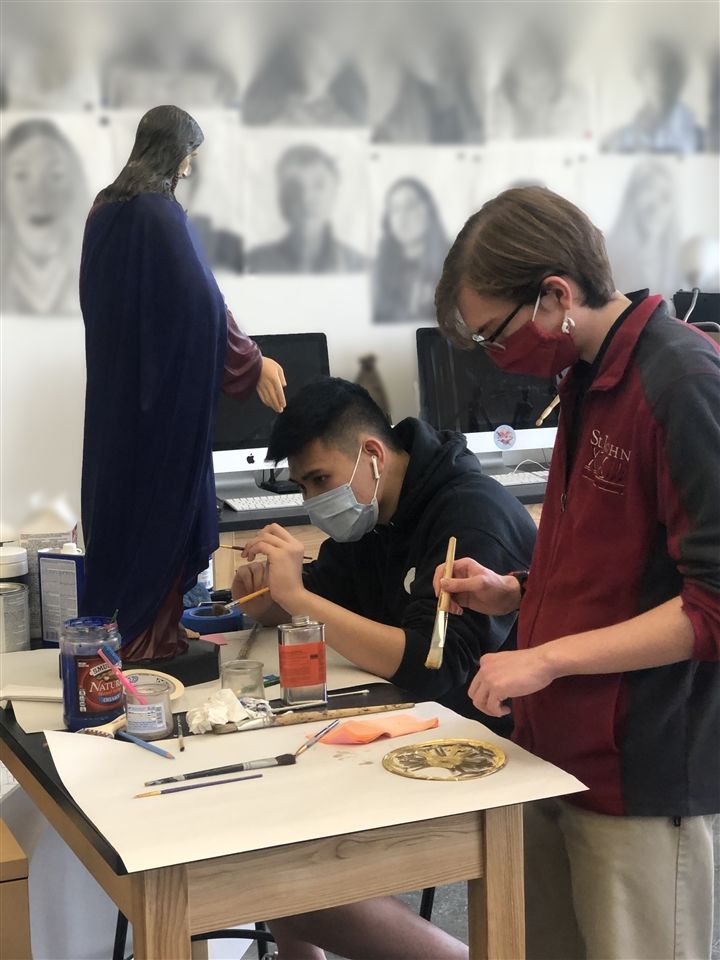 6/14/2021
Recently the Art Department of St. John XXII College Preparatory School restored a Sacred Heart of Jesus statue which will soon take a permanent place on campus.  Principal Joe Noonan has quite a history with the statue and brought it to Art Teacher, Carol Szymanski, earlier this year, hoping it could be repaired.  However, with school’s decision to go fully remote for several days early in the second semester, followed closely by a winter freeze, the project was put on hold.  During the Easter season, the time was right for Mrs. Szymanski, along with three upper-level art students, to begin the work that would span several weeks. Their enthusiasm for the project went well beyond the needed repairs, and a beautiful restoration was completed just before classes dismissed for the summer.
While Noonan was serving as Principal at Calvert High School in Tiffin, Ohio, his good friend, Charlie Letterhos, came into possession of the statue when he rescued it from storage at St. Joseph’s Church. Removed during renovations in the 1970’s, he found it in very poor condition, which he painstakingly restored.  Letterhos presented it to Noonan as a gift in 1991, celebrating a successful capital campaign at Calvert. The statue stood in the main office, and later in the renovated school chapel.
Rescuing and placing religious statues became somewhat of a hobby for Noonan and Letterhos, as beautiful restorations of the Immaculate Heart of Mary, St. Joseph, St. Angela Merici, St. Francis of Assisi, and several Crucifixes, have graced Catholic institutions and homes in the Tiffin area for years.
In late 1999, Noonan’s vocation led him to Texas, and Letterhos insisted that he bring the statue with him. Unfortunately, it was damaged in shipment. The right hand was broken, losing several fingers.  The elbow was cracked and chipped significantly, and one toe was broken.
Since then, the Noonan family has kept the statue, hoping for a second restoration and permanent home – a place where it would help lead the faithful to prayer.  Soon after arriving at SJ23, it became clear to the new principal that this campus would be the perfect place. The school’s patron, St John XXIII, held a deep devotion to the Sacred Heart of Jesus, which he speaks of throughout his autobiography, Journal of a Soul.
Szymanski and art students, Claire Cohen, Robert Wells, and Vincent Tran repaired the hand, shoulder, and toe; and repainted the statue in the traditional colors of deep red and blue, symbolizing Christ’s humanity and divinity.  As a final touch, they gilded the halo and trim of the garment with gold leaf.  During restoration, a plaque which was previously covered by paint was discovered, revealing the statue was originally crafted in Munich, Germany and marketed in New York City.
Once again, this wonderful statue will be blessed and displayed at an appropriate time following the start of the 2021-22 school year.  The students are proud to have played a role in the restoration and pray their community will be blessed for many years through this devotional image.
Every time I hear anyone speak of the Sacred Heart of Jesus
or of the Blessed Sacrament, I feel an indescribable joy. It is as if a wave of precious memories, sweet affections and joyful hopes swept over my poor person, making me tremble with happiness, and filling my soul with tenderness.
Pope St. John XXIII
Back

St. John XXIII College Preparatory forms the hearts and minds of young men and women in a Christ-centered community dedicated to academic excellence, the pursuit of virtue, and service to others in the Tradition of the Catholic Church.